Skip to content
We left Pastor Simon’s house in Namanga at the Kenya border around 3:30 Tuesday afternoon and arrived at Empukani around 6 PM. The last 2 hours of travel was on very rough dirt roads severely eroded during the rainy season and marred by dried mud holes. We crossed several bone dry creek beds, some of which were very deep and wide. It was very apparent that we would not be able to pass through these dry gulches during the rainy season that will begin in several weeks, so this trip to Empukani was very timely. There were  regular sightings and encounters in the road of herds of goats, cows, oxen, and/or donkeys, each accompanied by Maasai men. We could see huts along the road and in the distance, which were homes to these Maasai peoples. The countryside was thick with stressed vegetation in some areas and relatively open for miles in some areas, and mostly hilly, with mountains in the distance. We periodically had very brief sightings of wild African wildlife such as ostrich, impalas, gazelles, baboons, zebras, dik diks, and squido. About halfway to our destination we stopped to stretch our legs and the land cruiser filled up with DOZENS of very friendly flies. But thanks to the extended dry season, I did not see one mosquito!
As we approached the Empukani community we encountered several large groups of children that were extremely excited to see us. I learned the next day that they were walking from the schoolhouse in the community to go to their homes that were several kilometers away. When we arrived, we were greeted by Pastor Timothy and his wife, Agnes, and several other of the community members. After introductions, hand shakes and embracing each other in typical African fashion, we managed to pull away to identify the best area to pitch our tents, which we quickly completed as the sun set over the distant hills.

After setting up camp, we mingled with some of the locals as we awaited dinner. We were approached by 4 children, who bowed their heads as they had been trained to do as they approached adults, requesting acceptance to join the group. Acknowledgement was provided by placing a hand on their head. One of the With Open Eyes men, Doug, quickly produced several head lights that he had brought and he delighted them by affixing one on each forehead. The next day we met one of the Maasai men named Paul and learned that these were 4 of his 6 children.
The women set about preparing a great meal for us and we sat around a fire to enjoy our meal, fellowship, and have a time of sharing and singing. 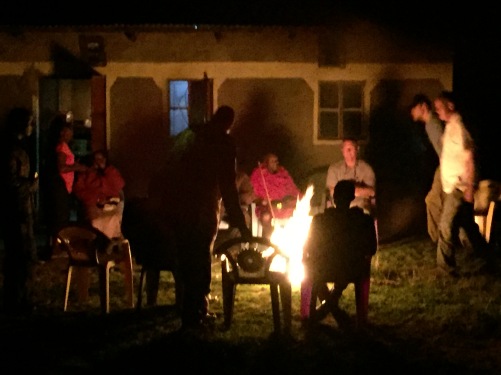 I assure you that all of the meat was VERY fresh and had not been plucked or skinned but a few minutes before being placed in the cook pots. The fresh pineapples, bananas, mangoes, and watermelon were delightful.
Early the next morning, around daylight, before emerging from our tents, I heard voices and footsteps of the local people. From that time around 6:30AM until around 8 AM, groups of children arrived at the relatively new schoolhouse, where they attended school and played sports on the large playground that consisted of a soccer field and volleyball net. I estimated that there were at least 150 children in that field on Wednesday afternoon. They all left in time to get home before dark.

Most of Wednesday was spent with about 30 Mobile Messengers that arrived on motorcycles from around the region. Many of these pastors shared the difficulties they were having with providing for their families because of the demands of ministering to their churches and the difficulties brought on by the dry season. Several of the With Open Eyes men spoke encouragement from scripture. After several hours of sharing and praying, we broke for lunch. After lunch, Jim spent an hour discussing conservation agriculture best practices after which I shared scripture regarding seeking God with an open heart through difficult times.
We enjoyed listening to some of the Maasai men, Paul and Daniel, talk about life as a Maasai. We were very intrigued by their stories of fighting lions that attacked their flocks, and Paul’s success of killing 5 lions with spear and sword that Maasai men carry at all times and are very skilled with. Several of us practiced throwing the spears, but offered no threat to the lion population.

We spent our final night in our tents and rose early on Thursday morning to repack for the trip out of the remote community. After a good breakfast prepared by our gracious hosts, we prayed together, embraced our new friends and brothers and sisters in Christ and departed around 8:30 to travel back to Namanga. We took Pastor Simon’s wife Agnes and Daniel to her house and began the trek north to Nairobi.