I flew out of Arua on Saturday morning, arriving at Entebbe just before lunch. I was able to meet with our irrigation supplier and get a few things ironed out with them. I then was able to meet Pastor Gabriel Nicholas, with CRU. He is the first South Sudanese pastor we met with in 2015. We also did training with him in Juba in 2016. Their team has relocated to Gulu, Uganda during the instability in South Sudan. Once I got back to the Mission Guest House, I had dinner with Ronald Kuteesa, who was an instructor at the vocational school at the Harvesters in Yei. It was good to reconnect with him and here about his work with the Ugandan Ministry of Agriculture.

On Sunday, I left Entebbe and flew to Nairobi. Me and my three huge duffel bags. Kenya Airways gets a gold star for only charging me $20 USD for the added bags. That was something that had been a source of worry on the trip. 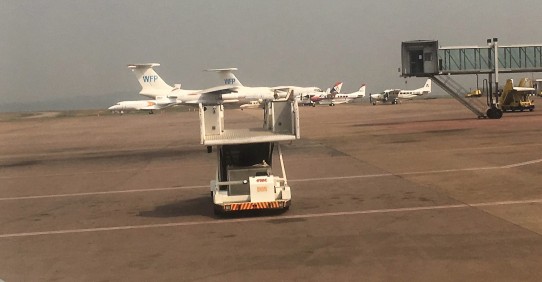 Got to see some of the World Food Programme planes on the tarmac at Entebbe. Our former governor, David Beasley, is now the chief of WFP.

I was met in Nairobi by my driver, George. He helped me change some money and get my sim card for my phone reactivated. Cell service is a bit tricky in Africa – each country has their own system. We then got on the road for Tanzania.We drove through the Rift Valley area on the way. It was really an amazing sight. We had climbed to an elevation of nearly 7000 feet. And then this:

Psalm 19:1  The heavens declare the glory of God; the skies proclaim the work of His hands.

A truck had a little problem negotiating the curve. The ensuing traffic snarled us up for a good while. So much so that we had to change our stop for the night.

Yay! More baboons! No hitchhikers this trip, though!

Some of the scenery looked more like a drawing than real life.

We rounded a curve and found this Catholic church. George told me that it had been built by Italian POW’s in 1942. There is a sign to that effect near the church, but I wasn’t fast enough to get a picture of it! Not sure if the POW’s were Italian soldiers or prisoners of the Italian soldiers. Maybe in my spare time I can look it up! Ha!

We overnighted in Narok. There is a lot of agriculture in the area. I probably saw more farm equipment there (including several combines) than in the rest of the trip up to that point. On Monday we got back on the road early.

This is the town of Kisii. It must have been market day, because it was pretty packed! Funny story…..I had left some drip tape with my friend, Mac Magruder, in Nairobi. The transport company was to make arrangements to retrieve it. Mac and his family had been gone since shortly after Christmas. His watchman gave the driver the wrong box! We had Aunt Gertrude’s prize end table in a cardboard box rather than my drip tape. I did not check things when we set out from Nairobi, assuming that all was well. Well, it wasn’t! Not knowing how the border would be about crossing, we dropped the table at a restaurant in Kisii. We will pick it up on the return trip and George will ferry it back to Nairobi. Never. A. Dull. Moment!
We got processed through the border without any issues. My Tanzanian visa from last year was still active, so I didn’t even have to pay anything! Bonus! I am hoping that our return trip on Thursday is as easy. 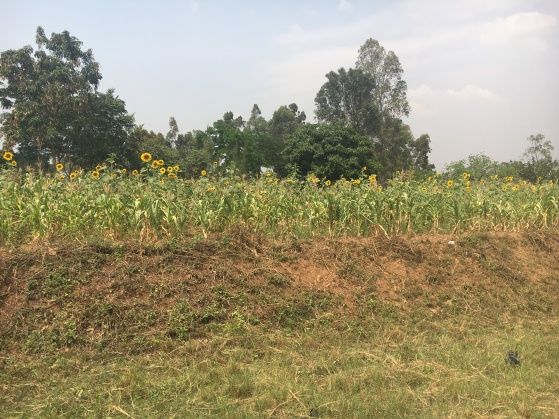 And I leave you with some sunflowers we found along the road in Tarime, Tanzania.

One thought on “On the road to Tanzania!”